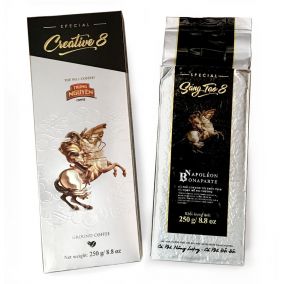 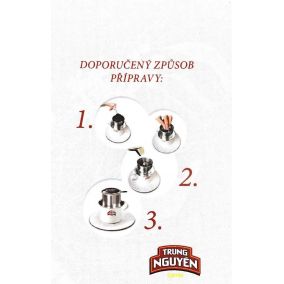 Vietnam is historically one of the most important countries involved in coffee growing, today it is the world's second largest producer of coffee (the first is Brazil) . This coffee is a big surprise for most coffee consumers.

The history of coffee throughout Southeast Asia dates back to the Dutch and French colonization in the 18th and 19th centuries. Around 1890, the French established a thriving coffee industry in several parts of Annam County, a mountain plateau that spans several countries. When it comes to coffee, Laos and Cambodia are probably older players than in Vietnam. Eventually, Vietnam became the leading coffee producer in all of Southeast Asia.

Vietnam and Southeast Asia have a fascinating topography. Locations in mountainous areas with prevailing winds are optimal. There are north-facing slopes that have a completely different climate than the southern slopes, wide areas with altitude, which are right for different types of coffee. For this reason, almost all types of coffee can be grown in that location , which is considered an ideal, or "native" climate, up to a height of 3600 feet (approximately 1200 m).

Half a dozen unique species and varieties come from the landscape where Vietnamese coffee is grown , among them Arabica (and the "original" Sparrow, or SE, Arabica), Robusta, Excelsa (sometimes called Chari), Liberica, Catimor and others.

What defines Vietnamese coffee and its uniqueness?

First, the topography of the Annamite Plateau is very complex and creates a regional microclimate that was observed more than a hundred years ago and used for maximum diversity of bean species and varieties. There are two basic approaches to coffee - the first is the origin before the multi-origin blend.

In Southeast Asia there is a high variety of beans of multi-origin, the mixed approach of coffee seems natural . Mixing different types of beans and varieties is inherently better in achieving a wide range of flavors, perseverance in aftertaste, sophisticated aroma, taste of iced coffee and overall mouthfeel.

OursSelf-taste tests show that 70% of consumers responded better to blended coffees and a higher rating was given to Robusta coffee before Arabica. Comments among consumers are often in the spirit of "I didn't know coffee could taste like this!". Beans are generally roasted in what is referred to as "butter oil". Occasionally, vegetable oils are used on the historically traditional "home", the style of roasting coffee involves creating a coating very similar to caramel. Effect using a small amount of sugar, oil and a hint of vanilla and cocoa. This coating gradually turns black during baking and the beans end up with a thin, hard shell.

Why is it hapenning?

Robusta beans ripen slowly on the bush and often pickers pick immature beans along with ripe ones. The traditional coating gives all beans a similar color. The presence of a few immature grains does not change the overall taste effect of the mixture. However, modern growers only pick ripe beans despite further work.

It's also in technology

Vietnamese style coffee is not unique in Vietnam. It is popular in Laos, Cambodia, Thailand and other regions. The cooking style is low-tech, using a simple metal filter called a Fin filter (most likely originated in Cambodia in 1800). In Vietnam, people do not drink coffee on the go. They sit in cafes or at home and make coffee at the table in individual portions. The fin filter also works great for making great iced coffee. 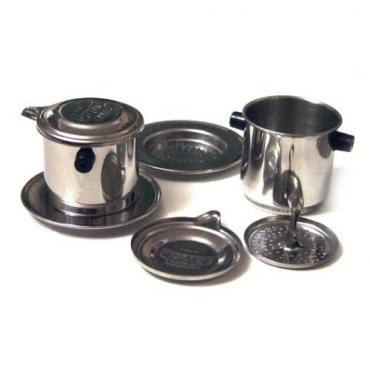 Phin filter is a traditional tool for preparing Vietnamese coffee , in the original Cà phê sua . Coffee is served hot and more authentic with ice and condensed milk.

Phin filter is a traditional tool for preparing Vietnamese coffee , in the original Cà phê sua . Coffee is served hot and more authentic with ice and condensed milk.

The primary tea regions in Vietnam are near the "base" in Annamite, a plateau in the upper part of South Vietnam. These regions were largely intact during the political turmoil of the last century. Large tea plants that thrive in this perfect environment have roots that are hundreds of years old. Old teahouses still stand today, although they are modernized.

We currently offer the following types of Vietnamese coffee: